Showing posts from April, 2018
Show all 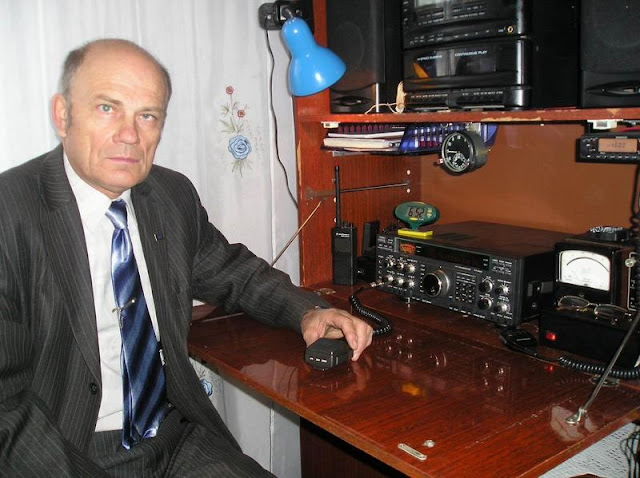 I tuned the radio around a little last night as the bands were rapidly changing and causing QSB on most signals. I opened WSJT-X and started watching 20m FT8.  There were a few stations from China calling CQ. Since I've never worked China, I tried several times to make contact with those stations.  Sadly, that was unsuccessful.  Then I saw UN7FU in Kazakhstan call CQ.  I wasn't 100% sure where that was but since I knew I hadn't worked them before, I wanted to give it a shot.  So after a few replies to his CQ call, I finally made contact with the station!

Over 6,300 miles away from my QTH, Kazahkstan is the world's largest landlocked country, and the ninth largest in the world.  It shares borders with Russia, China, Kyrgyzstan, Uzbekistan, and Turkmenistan, and also adjoins a large part of the Caspian Sea.

Another great contact in the log and hope to work UN7FU on other bands and/or modes some day! 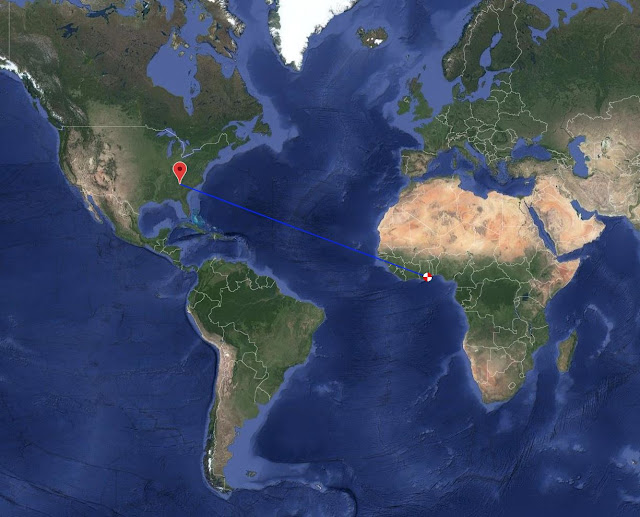 Last night, I sat and watched the 20m FT8 QSOs rolling down the WSJT-X screen.  I wasn't actively "playing radio", I was just unwinding and looking for any new countries or rare DX.  I happend to see 9G5AR from Ghana call CQ. There were many people trying to work them, so it to took me a little time to get a response.  With 50 watts PEP and my trusty Maxcon off-center fed dipole antenna, I was able to work them!  I've had several QSOs with stations in Africa, but this is my first contact with Ghana!


Ghana is located along the Gulf of Guinea and Atlantic Ocean, in the subregion of West Africa.

Worked the Isle of Man - MDØCCE 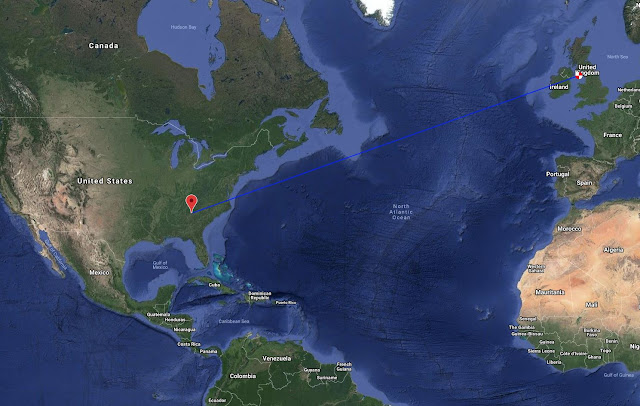 The Isle of Man is a self-governing British Crown dependency in the Irish Sea between England and Ireland. It’s known for its rugged coastline, medieval castles and rural landscape, rising to a mountainous center.

Spotted on the DX cluster, I was not familiar with the Isle of Man.  I was able to hear and work Bob Barden (MD0CCE) on 20m SSB!  At 3,900+ miles away, it was definitely a pleasure to work Bob and get it in the log! 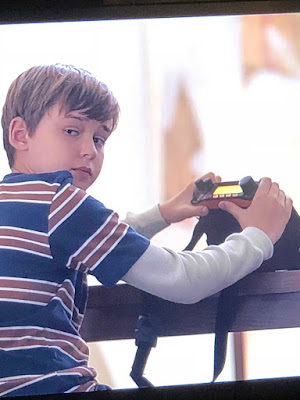 While my wife and I were binge watching Netflix's Lost in Space, I couldn't help but notice several references to radio.  I also think it was pretty cool that the character Will Robinson had a Yaesu FT-2980r VHF transceiver that he was using to try to reach his dad.  I have the same radio that I recently used to decode SSTV images from the International Space Station.

In this first season there is mention of a making a wire antenna, various radios, and Will even mentions that maybe the repeater isn't working when he can't get an answer from his dad...Though I'm not sure where the repeater would have been located while they were on an alien planet!

Regardless of the inaccuracies such as the missing microphone, sending CW with this VHF FM transceiver with a laughably small and inadequate antenna, etc...It is still great to see radio be a prominent part of the story line and critical to the survival of the characters. 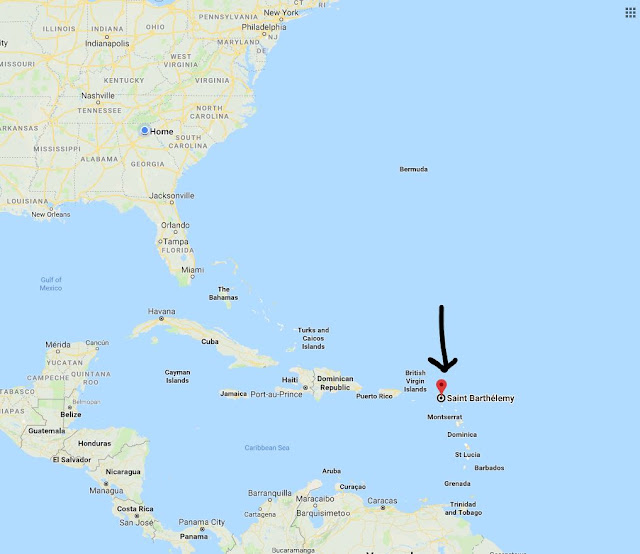 Saint Barthelemy is a volcanic island fully encircled by shallow reefs and has an area of 9.7 square miles. 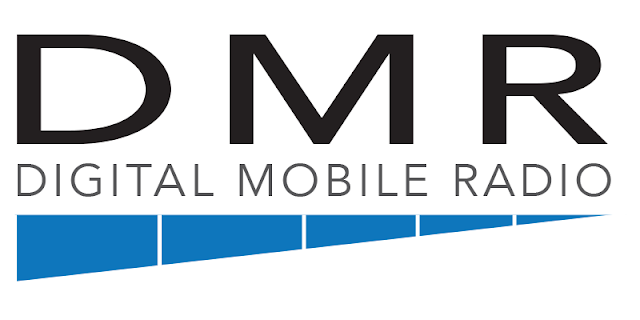 I've been starting to learn a little about DMR.  I purchased a TYT MD-2017GPS and joined the DMR-MARC Network.  MARC stands for Motorola Amateur Radio Club and anyone can join regardless of their affiliation (or lack thereof) with Motorola.  Once you join MARC, you are issued an ID number.  That number gets programmed into your DMR radio, you program in local DMR repeaters, and you're off!

The challenge for me has been that there aren't many local DMR repeaters. It looks like I may have to get a Shark RF OpenSpot to remedy this.  It plugs into your internet connection and lets your DMR radio work through the internet.  They are a little on the pricey side, but I think it would a good addition to the shack and I could probably take it to work and at least monitor DMR there as well.


Another challenge has been learning about the Talk Groups.  How they work, if they are live all the time or PTT activated, and what's appropriate to do on each Talk Group.  I'm still not…
Post a Comment
Read more 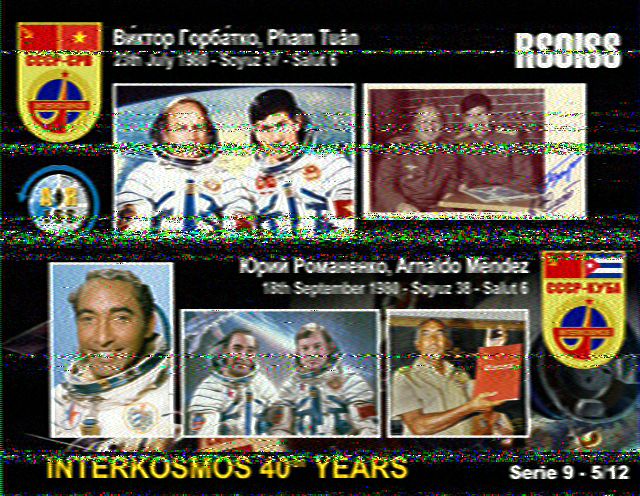 While experimenting with listening to amateur radio satellites, I saw that you can track the path of the International Space Station (ISS).  As luck would have it right as I'm starting to learn about Slow Scan TV, I see that the ISS will be transmitting SSTV images via VHF for a few days.  So far I've only decoded a few images on 20m SSB.  After talking to Brandon (KN4HDZ), we decided to each give it a try from our stations.

My challenge was figuring out how to hook up my Yaesu FT-2980R VHF FM radio to my PC to decode these transmissions.  I figured out that I could connect the external speaker jack on the rig to my SignaLink USB SPKR port!  I quickly installed MMSSTV and got it working just in time for the ISS to cross over the sky.

When it was time, I received part of an image!  Then after a short delay, I got another image and Brandon decoded one too!  Since this was not a direct path crossing you can see the images are incomplete and have a lot of noise.  But we'll tr…
Post a Comment
Read more 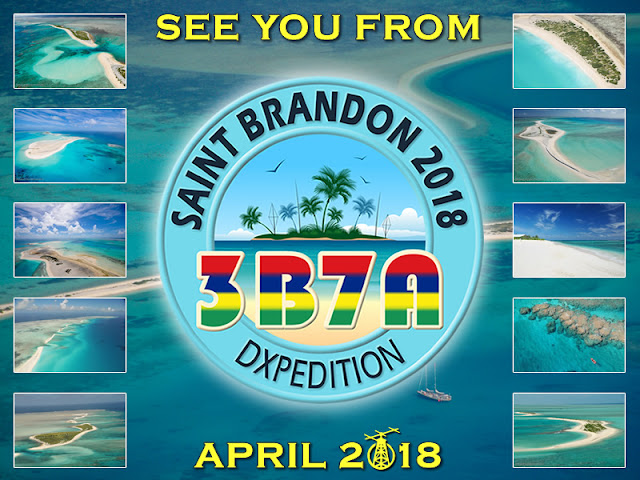 I was able to pick them up on 20m SSB after several calls.  Then later that evening found them working a big split on 40m SSB.  I actually found people piled up and calling, but had no idea who they were trying to work. After consulting the DX cluster and tuning around I finally found that they were transmitting out of the US Amateur band and QSX around 7.175 LSB.  Once I found the split, I tuned the amp and was able to work them on 40m fairly quickly!

I'm glad I got them in the log especially since they are only there for a short time!

Saint Brandon, also known as the Cargados Carajos shoals, is an Indian Ocean archipelago about 430 km to the northeast of Mauritius. It is a group of outer islands with a total land area of 1.3 km, belongs to Mauritius and is administered by the Outer Island Development Corporation (OIDC). The reef measures …
Post a Comment
Read more 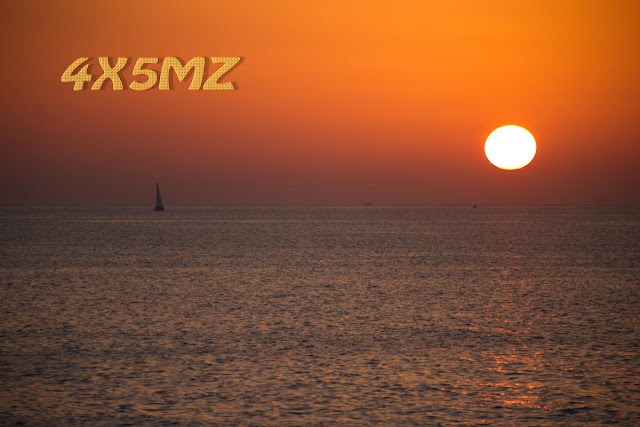 I made my first contact with Israel yesterday!  I was able to work 4X5MZ on 17m FT8.  Looking forward to a confirmation since I still haven't received one from Saudi Arabia and this area seems difficult to reach with just my OCF dipole. 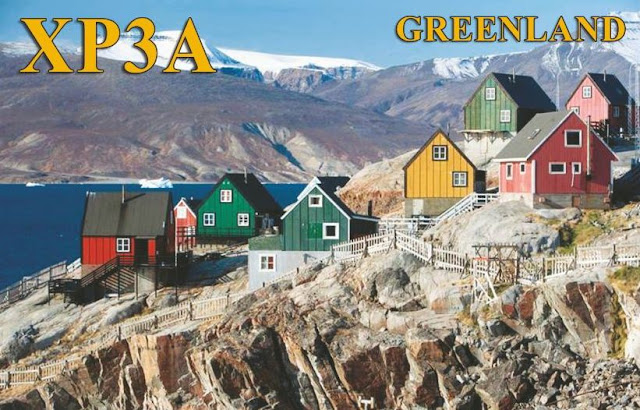 I made my first contact with Greenland yesterday!  I was working some FT8 on Friday and saw Iceland a few times and was unable to get them before they disappeared. But yesterday I was able to work Greenland on 17m FT8 with no problem! 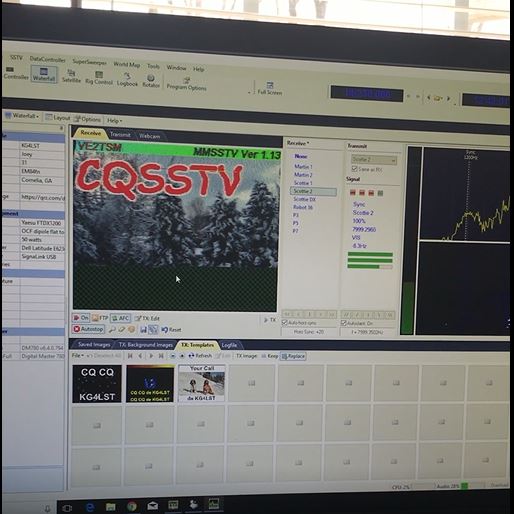 I've been learning about PSK31 and FT8.  I've had great fun both of those modes. I realized that though I've heard about it for years, I've never done anything with Slow Scan Television (SSTV). As a matter of fact, I had no idea where these types of transmissions take place or what a typical SSTV QSO would be.  All I know is that you send images similar to QSL or Post cards.
So...I just jumped right in.  It turns out that Ham Radio Deluxe has some built-in SSTV functionality in Digital Master 780.  Great! I already use DM780 for PSK31 and have it setup to work with my FTDX1200 and Signalink USB.  I found out that the most active place to find SSTV is 14.230 USB.
The video below is the first SSTV image I ever decoded. It was a CQ image from VE2TSM in Canada!  I quickly made a template and sent back a reply.  He sent back another image with a signal report! Now what?
I realized I was out of my depth because I didn't have the templates I needed and wasn't sure …
Post a Comment
Read more 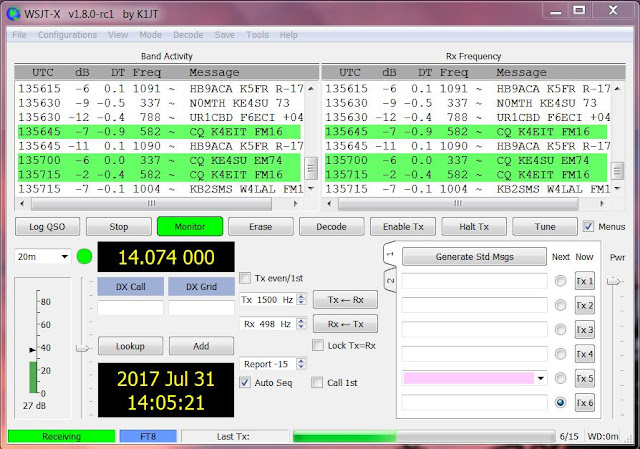 Last Friday (March 30th) I was off work for a company holiday.  I didn't have anything to do so I ended up spending some time playing radio.  I decided to stick to the FT8 digital mode and had a lot of new experiences!

I started out on 15m then moved to 17m, 20m, and then worked 1 station (CA2CEV - Chile) on 10m.  That was the first digital contact on the 10m band for me!  That new mode/band excited me and got me to thinking about 30m.  At some point, I thought that I had tested the SWR on my Maxcon dipole on the 30m band and found it to be unusable.  I must have just dreamed that situation up because upon checking it again, I found it to be high but the FTDX1200's built-in tuner was able to tune it flat with ease!  So I started working 30m FT8.  There was plenty of activity since only digital modes are allowed on that band.

Since I worked 10m and 30m FT8 for the first time, I thought "why not try 6m?"  So I gave it a shot and worked another station in Georgia on 6m…
Post a Comment
Read more
More posts